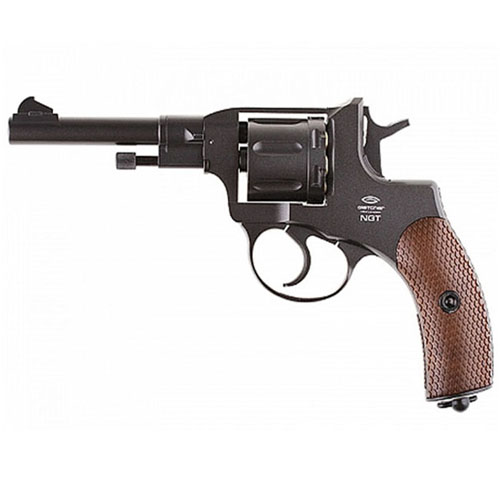 Fantastically realistic copy of the revolver used in wars by Russian and later Soviet Union soldiers. The firearm was designed by Belgians Leon and Emile Nagant. The Tsarist Russian army used it as a sidearm -- until the Soviet revolution, when USSR military adopted the revolver.

If you're a history aficionado and like sidearms that are extremely close copies of the firearms, then you MUST get this revolver. The realistic cartridge shells are just part of the realism. The way they're loaded -- singly through a loading gate (no speedloader!) -- is part of their charm. That's how soldiers reloaded their revolvers in the heat of battle. Even if historical charm isn't that interesting to you, this revolver will excite you in many ways.

Steel BBs can ricochet. The shooter and everyone in the shooting area should wear safety glasses when a gun is being handled (even if it's unloaded). Remember to remove all pets from the area, as rebounding ammo can hit them, too. Never shoot steel BBs at hard objects (including metal targets) or water, as that increases the chance of ricochet.