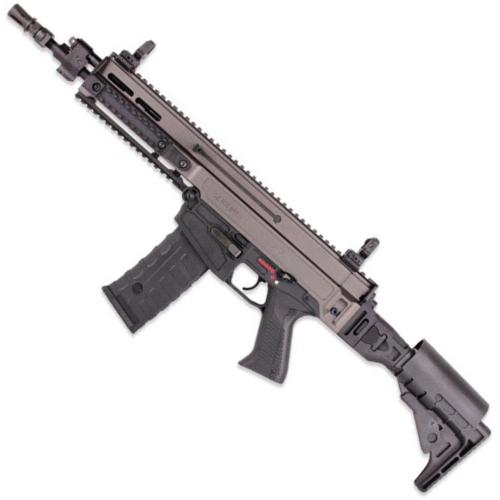 A replica of the modern, compact assault rifle CZ 805 Bren produced in the Czech Republic in the Dual Tone Gray version, made of aluminum and polymer, signed by the manufacturer of a original.


Universal in every area of play thanks to the high initial speed of the ball, about 395 fps, compact barrel and side-folding adjustable-length stock with high comb. Nylon pistol grip, wide trigger guard and large manipulators makes operating comfortable even in gloved hands.


The carabiner is designed for right-handed and left-handed users; both the fire selector, the magazine release and buttons for lifting the sights. The long reloading handle also has the ability to move it to the other side of the replica.


The body has been equipped with 4 RIS rails - the upper one, extending over the entire length and 3 shorter ones, removable, on the sides and bottom with the feature in the form of engraved numbers that helps you to remember the configuration of accessories. In addition, as part of increasing the convenience, the manufacturer has used an enlarged mag well with sloping internal walls to facilitate its quick replacement.


Adjustable, 5-position stock identical to the original, folds on the side at the touch of a button, thanks to which large size will not be difficult even with gloves. The adjustment button resembles the one known from the AR15 series, whereas the comb is suitable for adjustment to left-handers by turning.


Mounted on the upper rail, folding sights have three variants of use - standard sight, precision sight and slit - and are horizontaly adjustable. Equipped with solid cover to prevent damage, the front sight is verticaly adjustable.


Carabine has an integrated MOSFET system, which relieves and increases the life of the contacts, and the quick spring replacement system, with access under the removable gunstock, allowing easy adjustment of the BB's initial velocity. The battery socket is also located under the stock adapter and is equipped with a small Tamiya connector. Access to the HopUp system control is located under the dummy in the ejector window.


Four metal adapters make it possible to mount a sling or tactical suspension. The replica is equipped with one CAA Tactical polymer magazine with 360 BBs.