ACU and BDU, respectively Army Combat Uniform and Battle Dress Uniform, are acronyms that describe the shape or cut of the uniform.

The description of the uniform is then supplemented by color and camouflage patterns (Pattern) such as the UCP, for "Universal Camouflage Pattern," the gray digital camouflage used by the Canadian army.

In this way, it would be easy for you to know the difference between ACU and BDU. Thus, choosing one of them would become easier for you.

Choosing between the ACU and BDU

ACU (Army Combat Uniform) is the combat uniform currently worn by all soldiers of the Canadian Army. It is a flame-resistant uniform. This style dates from June 2004 and replaces the BDU. The ACU is designed with 50% nylon and 50% cotton. It is easy to maintain. The collar is special because it is of the “MAO” type with a velcro tab that closes it.

For the pants, there are thigh cargo pockets and lace instead of the tightening tabs at the waist. On the front of the torso, there are two slanted pockets that can receive military badges. The arms also offer a few pockets at the elbows and knees.

It is the old version used from the 80s to the 2000s. What did it look like? The jacket has a shirt collar, and there are two large straight pockets on the front. The BDU pants and jacket are closed with buttons. The jacket has four pockets (in addition to those on the chest).

The Propper BDU pants have two pockets on the hips, two cargo pockets on the thighs, and two on the back. Reinforcements are placed to haunt the elbows and knees. A tightening lace is placed at the ankles, and a tightening tab makes it possible to tighten the pants. 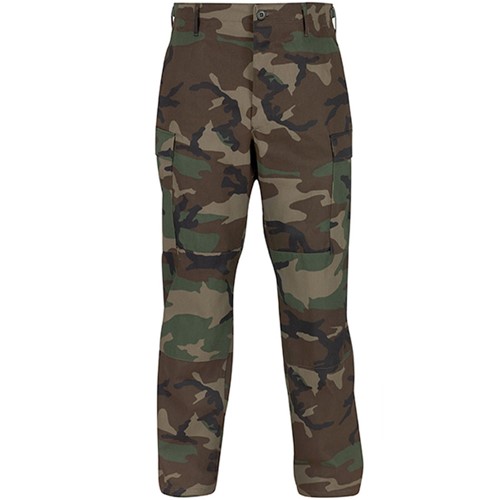 The shape of the BDU is characterized by large straight pockets, a jacket with a shirt collar, and the use of buttons to close the jacket and pants. It is the US combat outfit from the 80s to the 2000s. The jacket has four pockets, two breasts, two hips, closed with buttoned flaps. Fabric inserts on the arms strengthen the sleeve at the elbows. We find these reinforcements on the pants at the knees. The BDU pants, in addition to the two revolver pockets. These BDU pants have two large cargo pockets on the thighs and two on the back, always buttoned under a flap. The size of Propper BDU pants is adjusted with a tightening tab that allows you to gain at least one size. At the ankle, a tightening lace completes the equipment.

ACU was launched in 2004. Newer than the BDU, it uses velcro and zippers to close pockets, jacket, and pants. The main feature can be seen on the collar: a straight Mao type collar with a velcro tab that closes it. Cotton blend and polyester, maintenance is easy. We find on the pants, the thigh cargo pockets with an elastic that closes the pocket in addition to the buttons. The tightening tabs at the waist are replaced by a lace. On the jacket, the torso keeps only two slanted breast pockets closed by a Velcro fastener that can receive badges. Pockets have been added on the arms, also at an angle, closed with Velcro, and covered with Velcro. At the elbows and knees, a pocket has been provided to accommodate additional protection if necessary.

With time, ACU and BDU were adopted by the fashion and trend designers. From the masks to the shoes, the designers used one of these patterns to amaze their target audience. A French fashion designer Donatella included BDU camouflage style in his clothes for women’s fashion. Some people criticized his designs, but he explained that he just wanted to spread love, not war. After that, many fashion designers around the world started incorporating ACU and BDU styles in their clothes.

The ACU and BDU clothing were rapidly adopted by youngsters. These apparels are not just used for fashion but for casual use too. The apparels made up in ACU or BDU style are comfortable to wear at all times. For that reason, many people prefer to wear them casually. However, others like to wear them when they want to go to a party.

If you want to choose between these two, then the decision depends on you completely. The jackets of ACU and BDU are different. This difference in the jacket is main. The BDU pants have six pockets while the jacket has four pockets. In case these pockets are enough for you, then you can Buy Propper Pants and jackets of BDU. Nonetheless, if you want to wear clothes with more pockets, then ACU pants and jackets are excellent for you.

Both ACU and BDU are exceptional combat uniforms. Whether you are going for a trip in the jungle, desert, or anywhere else, then both these uniforms are excellent for you. What’s more, you can also wear clothes including these styles for fashion. In short, these camouflages will serve you best in every way. 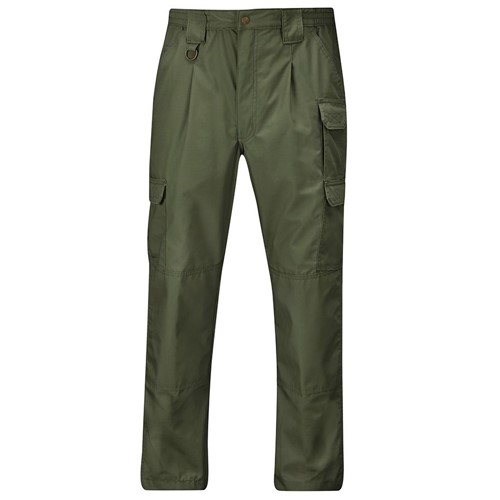 Can a civilian wear a military uniform in Canada?

According to Section 419 of the Criminal Code: Anyone, without lawful authority, whose proof lies with them, as the case may be:

a) Wears a combat uniform of the Canadian Forces or other naval forces, army forces or air force or a uniform which resembles that of one of these forces to the point of likely being mistaken for the latter;

b) bears a distinctive mark relating to wounds received or service performed in war, or a medal, ribbon, badge or military chevron, or any decoration or order awarded for war service, or an imitation of the preceding, or any brand, emblem or anything likely to be taken for one of these honors;

is guilty and will be punished. Strict actions will be taken against him/her.

Both these actions harm women and men who proudly serve in the Canadian Forces, who earn the right to wear uniforms through their dedicated work and the sacrifices they make for the country.

However, if a civilian is wearing apparel, including the pattern of ACU, BDU, or any other combat uniform, then it is completely fine. For a couple of years, the designers are adding the touch of combat uniform style in their apparel. A civilian can wore these apparel for fashion, casual, or any other reason.

How do humans use camouflage?

A very resistant, spotted canvas, the color of the woods and the earth: it is the camouflage, essential in the war to hide from the enemy. There was a time when this pattern was only used in military clothing. However, today, the camouflage fabric in fashion has taken on the opposite meaning: getting noticed by friends and strangers. The reason behind it is that for some years, it has been a trendy print, almost a classic of catwalks and city streets. 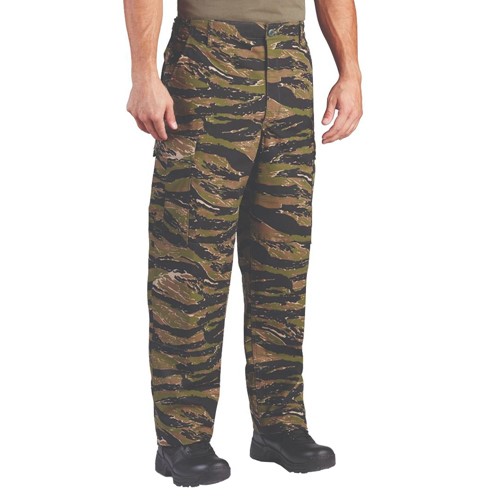 The military camouflage refers to any method used to make it less noticeable military forces to enemy forces. In practice, it is the application of colors and materials useful for hiding visual uniforms or making something uniform looks like military uniforms and equipment.

Military camouflage has as its main objective to deceive the enemy regarding the presence, position, and movement of its military units by making use of concealments, disguises, and other deceptive devices applied to ground troops, vehicles, aircraft, and any type of military structure or position. Some techniques used in camouflage are the cancellation of shadows, the "breaking" of human lines or means, mimicry, and blinding camouflage.

Since sight is the main sense organ of the human being, camouflage focuses on misleading and deceiving the human eye. In modern war, some forms of camouflage offer "shelter" also from radar surveillance and infrared radiation. 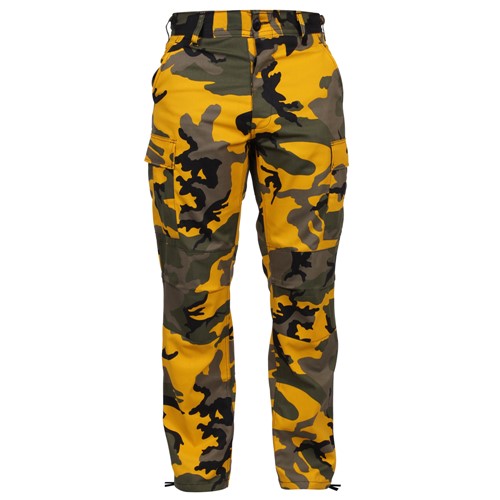 Camouflage has gently invaded all the fashion items: from head to toe today, you can and must find at least one corner where you can place this spotted fabric. From the sturdy frame of the sunglasses where it has replaced the tortoise color, to the spotted scarves and scarves of all thicknesses, to be worn in summer and winter. Tops, extra slim or extra-large sweaters, sheaths, pants, shorts, skirts, and skirts are now found not only in the classic spotted camouflage fabric, military color olive green, black and gray but in a thousand colors up to candy pink on white cleared on the catwalk in 2015.

On the wristwatches and rubber bracelets stand out; in the hands, there are camouflage smartphone covers that protect the phone from bumps and scratches but, at the same time, catch the eye of the neighbor. The underwear does not fail to amaze: the camouflage is found in complete underwear, on stockings, tights, and leggings in a riot of stylized themed patterns and a thousand colors.

And here this military fantasy reaches down to the feet in precious evening sandals as high fashion commands, up to the inlays of biker boots, up to the classic ballerinas also available in camouflage pony or camouflage style leather. There is nothing to choose from precious fabrics or vintage and original raw canvas: because among the 2015 fashion trends that still see camouflage as the protagonist, the well-matched original military garments are a real trump card in women's military fashion.

After reading the above content, it would be easy for you to know about ACU and BDU. Both these camouflage patterns are quite popular for decades. Each pattern has its own uniqueness and significance. Militaries across the globe are making the most of these patterns. When it comes to selecting between these two combat uniforms, then it is entirely up to your choice. ACU and BDU are both comfortable to wear. You can wear them for fashion, casual or any other purpose. However, always remember that you have to consider the laws in your country before wearing these combat uniforms.

Follow Camouflage to be notified about sales and new products.