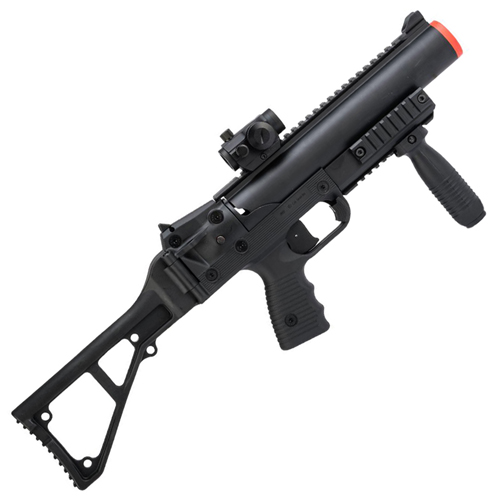 The B&T GL-06 is a fully licensed replica grenade launcher, originally made by the Brugger & Thomet, Switzerland. The stock and receiver are made of polymer and the barrel and front guard is metal. All four side rails are metal and will support any accessories imaginable. A quick-remove front grip is supplied to make the GL-06 complete. The GL-06 launcher takes any length airsoft grenade, which is a device that looks like a real world grenade, but uses a gas propellant to fire a variety of projectiles, like large amounts of 6 mm BB's. When inserted in a grenade launcher, and fired, it shoots all the BB's at once with a big blast, great for room clearing and suppressive fire.

The GL-06 was developed in response to a recent request from the police force of a leading European nation which sought to obtain a non-lethal weapon for anti-riot application with the particular need for pin-point accuracy at standoff ranges (beyond 43 yards for such scenarios) when firing impact rounds. The GL-06 is lighter and more compact than other stand-alone weapons of the same class (such as the US M79 or German HK 69), yet it is capable of great accuracy, tactical flexibility and has good ergonomics. A special dedicated "less lethal" version of GL-06 is produced as the LL-06. Although the LL-06 is a variation of the GL-06, the main difference is the color of the frame. Both weapons are fully capable of firing a complete range of 40mm x 46 munitions.