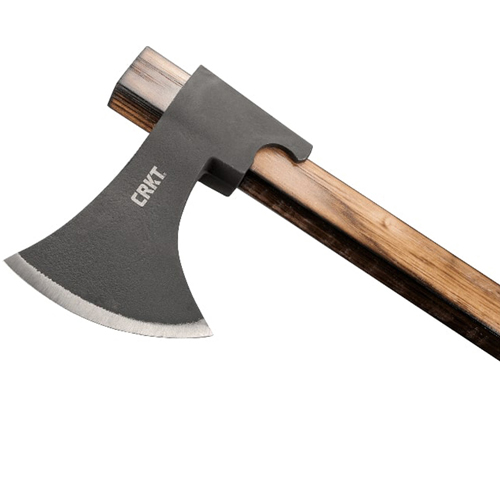 Ancient form meets contemporary function. With deep roots in 8th century weaponry, the Cimbri™ two-handed camp axe mimics lines, balance, and heft of its medieval counterpart. But unlike the Frankish axe, its primary adversary is a stout log.

Veteran and designer Elmer Roush was perusing the weapons collection in the British Museum when he was struck by an ancient Frankish axe. Inspired by the flawless intersection of artful lines and powerful usability, he set out to create a modern camp and mission-ready version and name it after the Germanic people that challenged the ancient Roman Republic. The result: a hot-forged carbon steel axe head sculpted for a balanced swing and a deep bite. Paired with the ergonomic Tennessee hickory handle, it’s ready to do right by its heritage.

An ancient axe paved the way for the contemporary powerhouse that is the Cimbri™.

About the Forged By War® Program

In 2013, Ryan Johnson of RMJ Tactical, designer of elite, military, tactical tomahawks, approached CRKT® with the news that he had been working with a few combat veterans that had returned from war with varying degrees of post-traumatic stress (PTS).

To help work through their challenges, they have been designing and forging steel into custom tools. Drawing from their experience earned in combat situations, they have been creating tools they wished they had available to them in the battlefield.