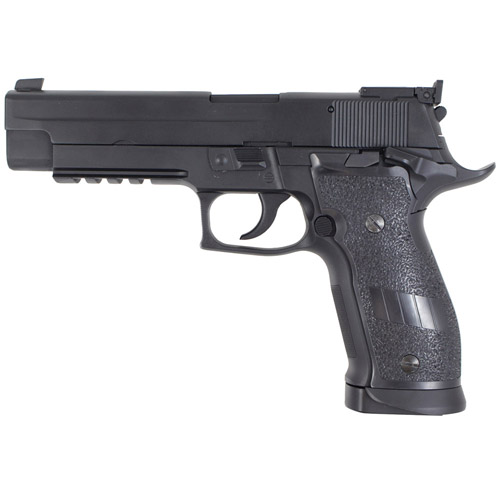 The Sig Sauer P226 pistol was developed as an improved, high capacity version of the P220. The P226 quickly became one of the most popular service pistols, being used by police, military and security forces, as well as by many civilian shooters around the world. Initially available in 9mm, it was subsequently adapted to .40 S&W and .357 SIG calibers, which are extremely popular in the USA. In fact, the P226 was the first pistol to be chambered for the .357 SIG, a high velocity, high penetration 9mm cartridge, preferred by many American highway patrol services as well as by the US Security Service.

This is a P226-S5 pistol replica model from KWC. The slide is made of metal as well as the outer barrel. KWC's P226-S5 is a CO2 gas blowback model, firing in semi-automatic mode. The magazine can carry 18 rounds of BB per clip with a shooting power of 328 FPS. There are no markings on this pistol and a tactical rail allows for flashlight/laser attachment.